The College Football Playoff (CFP) today announced a lineup of multi-platinum national recording artists that will perform at AT&T Playoff Playlist Live! (January 8-9) and the Capital One Stage at Allstate Championship Tailgate (January 10). The free concerts will take place in Indianapolis’ Monument Circle leading up to the 2022 College Football Playoff National Championship, set for Monday, January 10, at Lucas Oil Stadium. 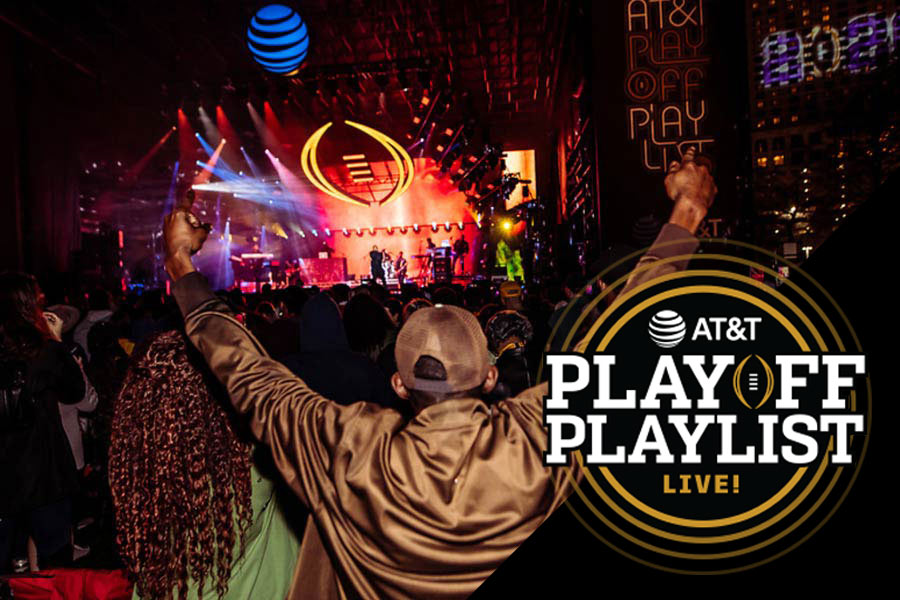 Gates for AT&T Playoff Playlist Live! will open at 5 p.m. ET each day, and fans will be admitted on a first-come, first-served basis. Fans unable to join in-person in Indianapolis will be able to watch the live-streamed performances live online via CFP All Access and AT&T social and digital platforms powered by AT&T 5G.

On Monday, January 10, the stage will be transformed into the Capital One Stage at Allstate Championship Tailgate. Multi-platinum selling hitmaker Sam Hunt will perform, along with YouTube’s Artist on the Rise, BRELAND. Gates will open at Noon ET.

The 2022 College Football Playoff National Championship will take place on Monday, January 10 at 8 p.m. ET. The game will air live on ESPN.

The College Football Playoff matches the No. 1 ranked team vs. No. 4, and No. 2 vs. No. 3 in semifinal games that rotate annually among six bowl games – the Goodyear Cotton Bowl Classic, PlayStation Fiesta Bowl, Chick-fil-A Peach Bowl, Capital One Orange Bowl, Allstate Sugar Bowl and Rose Bowl Game. This season’s Playoff Semifinals will take place Friday, December 31, 2021, at the Goodyear Cotton Bowl Classic and the Capital One Orange Bowl. The College Football Playoff National Championship will be Monday, January 10, 2022, at Lucas Oil Stadium in Indianapolis, Indiana.

Three-time Grammy nominee Doja Cat developed a knack for music by studying piano and dance as a kid and listening to the likes of Busta Rhymes, Erykah Badu, Nicki Minaj, Drake, and more. Signed to Kemosabe/RCA in 2014, she released her Purrr! EP and followed that with her debut album Amala in 2018. Doja Cat released her sophomore album Hot Pink in 2019 to mass critical acclaim, reaching platinum status with more than 14.5 billion streams worldwide and featuring “Say So,” her Grammy-nominated, four-times platinum No. 1 record. Doja Cat’s new album, Planet Her, debuted at No. 1 on the Billboard Top R&B Albums chart and No. 2 on the Billboard Top 200. The lead single “Kiss Me More” ft. SZA, is certified platinum and hit No. 1 at Top 40 and Rhythm radio with more than 2.8 billion streams worldwide. Doja Cat also recently became the first rapper to have three songs in the Top 10 at Top 40 radio.

Grammy award-winning Twenty One Pilots quietly emerged as one of the most successful bands of the 21st century and redefined the sound of a generation. The Columbus, Ohio duo of Tyler Joseph and Josh Dun ascended to a creative and critical high watermark on their new album, Scaled And Icy. The album debuted at No. 1 on Billboard's Top Rock and Alternative Albums charts, while landing at No. 3 on the Billboard 200. “Shy Away” spent eight consecutive weeks at No. 1 at Alternative Radio and “Saturday” just climbed to No. 1 at Alternative Radio, marking the band’s ninth No. 1 single at the format. Twenty One Pilots’ 2018 Platinum certified album TRENCH featured the platinum singles “Chlorine,” “My Blood,” and the Grammy-nominated “Jumpsuit.” The band’s mainstream breakout, 2015’s BLURRYFACE, was certified quadruple-platinum and garnered a Grammy award for the Diamond certified “Stressed Out.”

Multi-platinum selling, award-winning hitmaker Sam Hunt’s sophomore album Southside debuted to critical acclaim, landing at No. 1 on the Billboard Country Albums chart. Named one of the Best Albums of the Year by The New York Times and US Weekly, the Platinum-selling project features his No. 1 hits “Kinfolks,” “Breaking Up Was Easy in the 90’s,” “Hard To Forget,” and his three-week No. 1, eight-time platinum-selling, Grammy-nominated smash, “Body Like A Back Road.” Hunt’s latest song “23” is playing on country radio now. Southside follows Hunt’s Grammy-nominated, triple-platinum-selling debut album, Montevallo, which also topped the Billboard Country Albums chart and produced four No. 1 singles and six achieving platinum or multi-platinum status, including “Leave the Night On,” “House Party,” “Take Your Time,” “Break Up In A Small Town” and “Make You Miss Me.” Hunt has accumulated more than 10.8 billion global streams and has earned 39 million RIAA certified units.

Re-envisioning what pop can be in the 21st century, multiplatinum indie pop trio AJR —Adam (bass, vocals), Jack (vocals, guitar) and Ryan (ukulele, piano, vocals)—have generated billions of streams and earned one triple-platinum single, one double-platinum single, four platinum singles, and one platinum album. 2019’s Neotheater marked their biggest first-week debut, bowing at #8 on the Billboard Top 200, #1 on the Top Alternative Albums Chart and #1 on the Top Rock Albums Chart. Not to mention, AJR remains one of the “500 Most-Listened to Artists” on Spotify. On the heels of Neotheater, AJR dropped the 2020 platinum blockbuster “BANG!”, which they performed on TODAY, The Ellen DeGeneres Show and the Macy’s Thanksgiving Day Parade. Now, the band opens up their world like never before on their fourth full-length album, OK ORCHESTRA [S-Curve/BMG] introduced by the single “Way Less Sad.”

Ava Max exploded on a global scale in 2018 with her triple-platinum smash “Sweet but Psycho.” Streamed over two billion times by 2020, it clinched a spot in the Top 10 of the Billboard Hot 100 for three weeks. Christened by Rolling Stone as “an artist you need to know,” Ava was nominated for a Teen Choice Award and won “Best Push Artist” at the 2019 MTV Europe Music Awards (EMAs). Her rise to pop superstardom continued with the Gold-selling “So Am I” (927 million global streams) and “Salt” (1.5 billion global streams). Her debut album, Heaven & Hell [APG/Atlantic Records] followed in 2020, skyrocketing to Gold certification upon release and featuring “Kings & Queens,” which has been streamed more than one billion times globally. Most recently, Ava has teamed up with Tiësto on their massive new dance anthem “The Motto.” A 2021 honoree on Forbes’ 30 under 30 list, Ava has cemented her status as one of the most listened-to pop artists in the world.

With his platinum debut “My Truck,” singer/songwriter/producer BRELAND has emerged as a bold new force on today’s music landscape. The Hip-Hop and Country hybrid hit #1 on Spotify’s Global Viral 50 in 2019, and a remix featuring Sam Hunt landed on best-of-the-year lists from NPR and The New York Times. Having signed to Bad Realm Records/Atlantic Records, he has collaborated with heavy-hitters such as Gary LeVox of Rascal Flatts, Nelly, Blanco Brown, Lauren Alaina, and Chase Rice. He’s appeared on The Kelly Clarkson Show, CMT Crossroads, Jimmy Kimmel Live!, Good Morning America, YouTube’s Artist on The Rise, and most recently, a Chevy campaign that launched during NFL’s season opener. He recently enlisted Keith Urban for the dynamic collaboration “Throw It Back” and is featured on Dierks Bentley’s single with HARDY, “Beers On Me.” Praised by Rolling Stone as “1,000 percent the whole package,” he made his Grand Ole Opry debut to a standing ovation.

In addition to AT&T Playoff Playlist Live! and the Capital One Stage at Allstate Championship Tailgate, fans can participate and experience the following in and around Championship Campus, located in downtown Indianapolis:

Media Day features one-hour sessions with student-athletes and coaches from each of the College Football Playoff National Championship participating teams. More than 1,000 credentialed media members will be present to cover the event, in addition to live broadcasts from ESPN and conference networks and activations by social media giants Twitter, Facebook and Instagram. Media Day is free and open to the public. Fans are invited to watch and will be provided with a complimentary small radio to listen in as student-athletes and coaches are interviewed by the participating media.

Extra Yard for Teachers Summit Powered by Get Your Teach On
NCAA Hall of Champions and Convention Center
Saturday, January 8

The CFP Foundation’s Extra Yard for Teachers Summit Powered by Get Your Teach On is a high-energy professional development event that inspires and empowers teachers annually in the city hosting the national championship game. Past speakers and supporters have included former US Secretary of State Condoleezza Rice, former First Lady Michelle Obama, founder of DonorsChoose.org Charles Best, ESPN college football analyst Desmond Howard, Grammy award-winners Leon Bridges and Lauren Daigle and former teacher turned comedian Eddie B. Educators are invited to attend the event in-person for free, and a virtual all-access option is also available for $35. Registration opens on November 18. For more information, visit cfp-foundation.org.

The Extra Yard 5K is a family-friendly run/walk in conjunction with the national championship game that offers a chance for locals, as well as out-of-town fans, to take part in the CFP festivities. The race will start and finish inside the Indiana Convention Center. And, if you’re not in Indianapolis for the national championship game, you can join us virtually! Each Extra Yard 5K participant will receive a t-shirt and medal, while the top overall male and top overall female finishers (in-person) will each win two tickets to the 2022 CFP National Championship. All proceeds benefit Extra Yard for Teachers, the College Football Playoff Foundation's primary platform that elevates the teaching profession by inspiring and empowering quality teachers.

Taste of the Championship is a premium dining experience and fundraising event on the eve of the CFP National Championship, offering attendees the opportunity to indulge in gourmet food and drink prepared by more than 20 local chefs and the communities of the two teams participating in the 2022 national championship game. The 2022 edition of this premium event serves as a unique combination of an exploration of local cuisine and a celebration of the teaching profession. All proceeds benefit the CFP Foundation's Extra Yard for Teachers initiative.